The dandies of the Congo 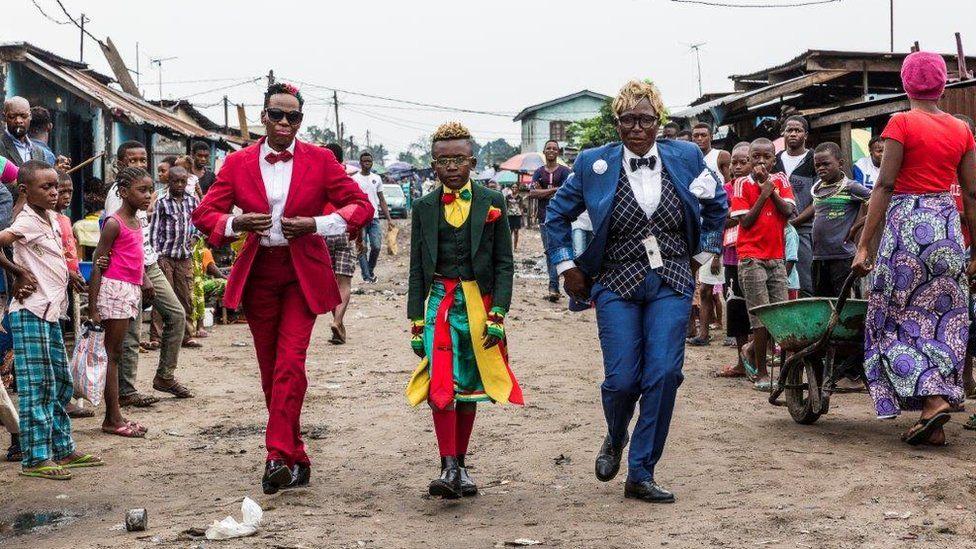 They are Congolese and, although they barely have the money to pay for their stylish suits, they worship luxury and have turned the European streets into their catwalks. They are the sapeurs, a movement that tries to claim their identity through appearance.

They walk around Paris, Brussels and London as if they were the protagonists of the best fashion productions, wearing colorful suits, shiny shoes and silk ties from Dolce & Gabbana, Versace or any haute couture firm, which they always complement with a cane. or a cigar, which they rarely smoke, to make it last. The street is their catwalk and they don't want to go unnoticed. They come from the Republic of the Congo, one of the poorest countries in the world, but that does not prevent them from dressing with the utmost refinement. They are members of the SAPE –an acronym for Air Fresheners and Elegant People–, a movement of Congolese (mostly men) that pays homage to luxury; exercise that begins in the African country and has as an essential requirement his time in Europe, where a sapeur can spend a thousand euros on a dress without remorse, even if all his savings go into it.

It sounds crazy, but it's not. His ideology harbors the paradox of fighting misery through appearance. This started during French colonialism in the 1920s, when the aristocracy gave away their old-fashioned clothing to slaves. The clothes, then, revealed themselves as a weapon against their reality, as if dressed as a French dandy they were suddenly recovering the honor snatched by their invaders. "It's about that, starting from the superficial, you transform yourself into the essential and acquire that power and prestige from others, skipping all the legitimate steps to achieve them," explains Chilean journalist María José Pavlovic, who has just premiered in Prague The yayas de l'élégance, an anthropological documentary that tries to reveal the essential aspects of this practice.

Today, the Mecca of the sapeurs is Paris. "They do a real feat to get to Paris. They work hard to buy designer clothes and achieve the dream of representation: dressing well," explains Pavlovic. There, they have reinterpreted European clothing and cultivated a unique and transgressive style, so much so that even the English designer Paul Smith – mastermind of the wardrobes of artists such as David Bowie and Cate Blanchett – was inspired by them to create a colorful collection in 2010.

The Congolese photographer Baudoin Mouanda (1981) is conquering the eyes of North Americans and tourists these days with his exhibition called Sapeur, which, due to the interest aroused, will be part of the Artist/Rebel/Dandy: Men of fashion exhibition at the Museo of the Rhode Island School of Design, open from April to August of this year.

The sapeurs themselves boast with the following phrase: "The white man invented clothing, but we made it an art."

"This is the tie worn by François Hollande, the President of France. After him and me, there is no one. I am the boss," says a sapeur in the documentary The yayas de l'élégance – available on vimeo.com –, which follows the story of three Congolese in Paris who aspire to be a granny, something like a sumo sapeur. That little nod to the camera explains a lot about SAPE. "For them, luxury is what distinguishes the rich from the poor, so when you put on the clothes of the king, you become one," says the journalist, who last year recorded the film to graduate with a master's degree in Visual Anthropology that she studied at the University of Manchester. "The hypothesis that revolves in it is how, deep down, black identity is acted upon: blacks have always had to be black for whites. In the apparent imitation of white clothing and way of being, there is an underlying criticism and vindication of their culture", explains the journalist, about to travel to the Congo to record another documentary, this time focused on the small female world of SAPE.

The Knights of Bacongo

In 2008, Italian photographer Daniele Tamagni traveled to Brazzaville, the capital of the Republic of Congo, to immortalize SAPE, the Congolese movement of elegant people. The result was a 224-page book, where the refinement of the sapeurs contrasts with the misery of Bacongo, one of the poorest neighborhoods in the city. The book has a foreword by designer Paul Smith, who brought this look to the runways in his 2010 collection. $226.93 at Amazon.